“Women Can Lead Too”. How Christine Coignard Made a Career in Russian Industry 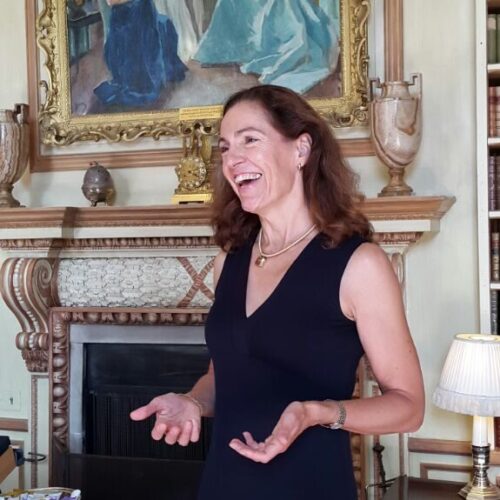 Christine Coignard helps Russian mining companies raise finance in the international market. In the 1990s, she participated in the restructuring of Interros assets, then managed investor relations in the gold mining company Highland Gold and served on Polymetal International’s board of directors. Currently, Ms Coignard is an independent director of the French metallurgical group Eramet and a senior advisor of the German startup foldAI, which brings artificial intelligence and data science into forestry. Women in Mining Russia’s Elena Chigareva discusses with Christine Coignard why females in top management are a sign of well-defined strategic objectives and how mining companies have found themselves at the centre of a green transformation.

— Were you scared of Russia?

— I was! My then-boyfriend, future husband, was offered a job in Moscow. I had a great project financing job at Société Générale in Paris. For me as a finance professional Russia didn’t seem as an opportunity, it was so unstable. From a career perspective, it was totally crazy. Then I thought, Russia is our neighbour, it is completely different, it could be a great adventure, and I could add value. My colleagues at Société Générale Paris said to me that Russia was not a country for women. However, Citibank was looking for someone like me in Moscow.

I was very much in an American bank environment, we were quite isolated. Yet I realised that Russia would not be developed from outside, by foreigners. It would be developed by Russians. Things were brewing. You had the first enterprises, the first oligarchs, significant capital being built up. I was asked by Interros, just after they acquired stakes in former state companies including Norilsk Nickel, to help restructure them.

— You were there at that very moment?

— I was one of the first foreigners to join a Russian group. For nine months, we were doing due diligence on Norilsk Nickel. I hired a French mining engineer to explain me what mining was. We presented to Mr Potanin what we had to do in the company. He said, great, go and do it. My team and I ended up in the management of Norilsk Nickel.

— How did you feel as a Nornickel female top manager?

—  I was parachuted by the main shareholder, which made a big difference. I though being a woman was an advantage, because I was not being seen as a threat. I was this exotic thing: a foreigner, a woman, a financier. People were nice to me, even courteous. From my perspective, there were more women in senior positions in Russia than there are now. So it was not an issue.

However, some colleagues told me, ‘Christine, as a foreigner you don’t count as a woman.’ Which at the time I thought was funny. It also meant that I didn’t have to comply to what was expected from a woman in the Russian environment. I was free from the gender role play, which is more prevalent in Russia than anywhere else I worked in. More recently, I was told I was assertive. It means I am becoming a woman, yes! Women are not usually expected  to be assertive in Russia, which is difficult when you are in a leadership role.

— How can we end this game?

— The gender role play does not allow people to be their best, and it works both way, for women and men. In the Russian social environment, men and women have different interests and responsibilities, which is reproduced in the companies. The good thing, there are many female engineers in Russia, and technical specialists and the middle management are not the problem. Yet people are not used to female leaders. It’s not just in Russia. But other countries have moved, and Russia has not. In my view, even regressed.

If there is a will — which I’m questioning — if there were a will, there are three ways Russian companies could draw on the talent whether it male or female.

Firstly, at the corporate level the senior management team should be aligned with the strategic challenges. The existing mining companies see their challenges in production, which  is overrepresented by men. But what are the strategic challenges of the mining companies today? It is environment, finance, adventurous treasuries, compliance, governance, community agreements. So why is it today at executive committee and top level you almost only have production people? It doesn’t make sense. Mining, reserves, development is a base, but it is not what makes or brakes a good mining company. It is excellency. And it can bring up so many women who usually work on these challenges.

— I think it will also help to reimagine the purpose from ‘mining metals cheaply’ to, for example, ‘supplying sustainable metals for the green future’.

So, the first thing is to align talent with strategy. The second is to find very high profile and credibility personalities who are convinced in business and social case of having gender parity.

In the UK, two business people, Sir Philip Hampton and late Dame Helen Alexander, launched the review [on the gender inequality in the boards of the largest companies]. I happened to know the gentleman. He worked at a large company with only men at the top. Eventually, they appointed a woman in logistics. She did a very good job, and he realised: women can lead, too! He also thought, the society pays for females’ education just like for males’, so why didn’t women contribute equally? [The review has become one of the major drivers of gender equality in the UK bringing the female share on board to more than 30%. In Russia, it currently stands at 10%.]

You have so many talented women in Russia who, put in a right position, could do so much more for themselves, their company and their country. Find a man, probably an oligarch, and a woman who can champion the advancement of women in business highest positions.

— I am trying to think of a personality. Some would need a thorough rebranding from excessively reach people skiing with young ladies to gender equality advocates.

— As a French, I don’t care what people do in their private life. It is more important what they do for society.

Thirdly, the wake up call would be if companies voluntarily disclosed, even on an anonymous basis, their gender pay gap. This is starting to happen in the UK. Include all the top management and count not just the fixed salaries and bonuses, but also stocks — this is where the real difference lies. Have the campaign focusing on senior management, because middle management is not a big issue in Russia.

— People will say that mining is not an environmentally friendly activity. How do you place it among your values?

— I can add value towards a cleaner world which depends on metals to decarbonise and electrify the economy. Lithium, cobalt, nickel, copper. It is a paradox. Mining has had a bad reputation, because until recently all sorts of things happened. And because large companies that we know form a very small part of mining on Earth. Globally, mining is mostly done by local companies that don’t have neither the knowledge nor the financial means and requirements to work properly. Yet the big companies are enablers of the cleaner world. It is very exciting. Mining is a place to be.

The mining sector has differentiated significantly from the oil and gas sector. Oil and gas is still an important industry, but will it be there in thirty years? Metals and mining will be in full blast.

— What are the challenges in attracting capital to mining?

— The first thing is the reputation and misperceptions about mining.

The second is the amount of capital needed, it is a capital intensive industry.

The third is ESG. We are a couple of years away from having common metrics of what investors are looking for and what the companies can deliver. There is still a lot of greenwashing companies do to make themselves look good. At the same time, investors can be looking for things irrelevant to a mining company, because they just don’t understand the business. Finding the right vocabulary and metrics on ESG reporting is important.

The forth issue is the size of the financial market. It is increasingly easier for big companies to get finance and increasingly more difficult for smaller ones. We are lacking years of exploration research to feed the needs, especially in energy transition minerals. Fortunately, since the last year, we have had more investors beginning to understand the importance of minerals for the innovations taking place to tackle climate change and biodiversity loss. And it’s happening throughout the supply chain.

Last, but not least, many banks have gone out of mining business. It’s risky, it requires a lot of capital. Luckily, we have a lot of liquidity in the market, so it is about how we direct this liquidity towards mining. We have new players coming in, for example special purpose acquisition companies (SPAC) that look into investing into mining companies.

It is a very small industry in comparison to the other like tech, finance, real estate. And not the sexiest either. There aren’t many people who understand it.

— A market for non-sustainable metal will die. Some of the countries already tax the carbon content of the products that companies import. If your buyer will have to pay an additional price at the border, because you emit more carbon than others, you will lose your customer. It will may not be reflected in the price itself, it may reflect in the market you’ll loose.

It is also critical to rethink the business because of the market. Until recently, we have had big metals — gold, silver, copper, nickel, iron — and an LME price for them. Now we have a whole mandalay of minerals coming into play like rare earth. Those are small volumes, and the new technologies that may utilise them are still in development. Miners have to be increasingly more aware for whom they mine and what the competition is. Now investment in the right product is more important than ever.