If a person wants to achieve something, then there are no obstacles, regardless of gender.

“Professional competitions help to look back and evaluate yourself and your merits. And it is very important to talk about the successful stories of women who realize themselves and find themselves in different professions of our industry. This helps to get rid of complexes and prejudices and opens up new horizons of possibilities. If a person wants to achieve something, then there are no obstacles, regardless of gender, “said Tamara Golovina, head of the Technology and Joint Projects Directorate of Polymetal.

At the contest “Talented Woman in the Extractive Industry” Tamara won in the nomination “Inspiring Leader”.

Material from our information partners dprom.online 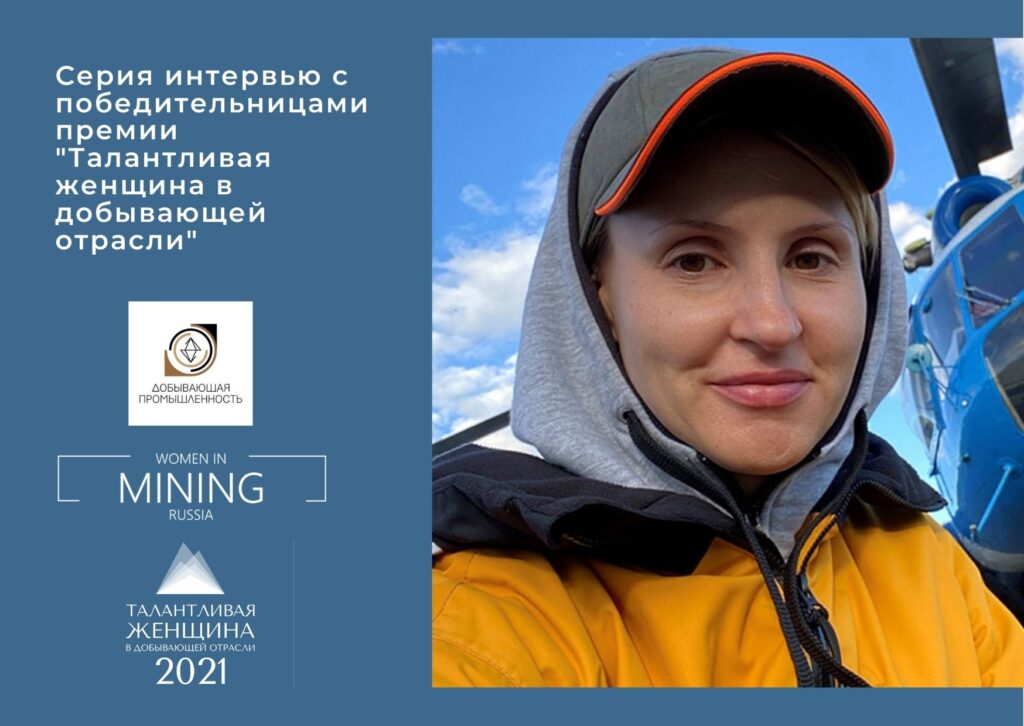 About how her path to success in geology was formed, about her education and formation as a leader and how to inspire colleagues to a result for a common cause – in an interview with the winner.

– Tamara, your father and grandfather were miners, we can say that the profession was inherited by you. Wasn’t there a thought of choosing a different path? Who did you dream of becoming as a child when you grow up?

— My childhood was spent in a small mining town. Of course, its atmosphere contributed to the fact that young people chose their own professions in the mining industry. But even despite my mining ancestry, I didn’t dream of becoming a geologist. I liked the exact sciences and everything related to economics. But the year was 1995 on the calendar, there was no way to go anywhere. We had a branch of the St Petersburg Mining Institute in Kirovsk, and I could pass the entrance tests at home. So I went into mining.

My love for the profession did not arise immediately, in the third year. The curriculum included a course in gemology, which is the science of precious stones. It was then that I had a desire to become an appraiser of precious stones and connect my life with geology.

My next professional hobby was geochemistry. This subject was taught to us by Vladimir Vasilyevich Gavrilenko, a very talented scientist. Under his guidance, I was engaged in the study of biocosmic systems – the layer where rock passes into the soil, and there is an interaction of “living” and “non-living” substances. We studied in detail the phenomenon of rapid vegetation on Valaam, where the rocks are completely rocky, and a fairly thin soil layer is unusually fertile.

During this period, I seriously thought that I would become a geochemist or even an ecologist. Our course was the first to be trained not for specialists, but for bachelors. I entered the magistracy just in the specialty of geochemistry.

— Your first job was Karelian Okatysh. How were the first working days? Did you have to learn anything additionally, or was the knowledge gained at the university enough?

— Yes, at that moment my life turned out in such a way that I decided to go to Kostomuksha to work in my specialty.

At first, I thought I had made the wrong choice: there were a lot of routine activities day in and day out. But now I understand that there is no other way to understand how a large full-cycle enterprise functions, which includes both a quarry and an enrichment plant.

I had to learn many things in practice, master special software products. I studied, for example, the calculation of the average content of the useful component and the volume of ore in the mining block, the repayment of mined ore, the calculation of ore volumes for the annual production program. Yes, in fact, to learn this science faster and more clearly in real production.

— What, in your opinion, is important for the training of geologists?

— It seems to me that our profession can be compared with the medical business. Of course, basic training is important, which can be fully obtained at the university, but the most valuable skills are acquired only in practice. A good geologist cannot be taught in lecture halls and even more so in an online format. Just as it is important for a future doctor to be an intern, for future geologists and miners it is necessary to practice in real production and in the field.

And I would also like to popularize mining professions, because often schoolchildren simply do not know who geologists, geochemists or, for example, hydrometallurgists are.

— How did you come to the idea of entering graduate school, writing and defending a dissertation?

— After working for two years in Kostomuksha, I realized that within the production enterprise, career opportunities for me are limited. At the same time, almost by chance, I met my former supervisor, who at that time headed the department at St. Petersburg State University.

The idea of the scientific work was based on the experience of working at the Kostomuksha deposit of ferruginous quartzites in Karelia. All iron ore deposits are huge. And by their nature, ferruginous quartzites and the rocks containing them contain gold. As a rule, its content is low, and it is quite difficult to extract it. But some researchers consider this factor as potentially beneficial, taking into account the volumes.

The same situation has developed at the Kostomuksha field. Analysis of the distribution of noble metals, identification of zones of high contents, study of the forms of finding metals became the topic of my dissertation. True, I was able to protect her only after four years: it so happened that I left Karelia for St. Petersburg, where I met my future husband and gave birth to a child.

— What place does scientific activity occupy in your life now?

— You know, geology is a fundamental science. But at the same time, a significant part of scientific research has a practical focus, any study can have the goal of approaching the detection of a mineral.

Very often, geologists rely on indirect signs, trying to understand where exactly in the studied area of the earth’s crust certain components are present. Of course, there are also direct signs, for example, we can drill, take samples and analyze the gold content in the laboratory. But immediately to get to the right site, of course, is very difficult. Therefore, we first investigate and analyze various indirect characteristics of the geological environment under study – geophysical, geochemical, mineralogical, etc.

At the same time, now there are many devices for recording the parameters of these characteristics. For example, using a portable infrared spectrometer, it is possible to obtain a spectral characteristic of the mineral composition of the substance under study. But to derive practical value from these data, one must have a deep understanding of the mineralogy and typomorphism of minerals.

That is why it is so difficult for me to find the line between science and practice. Special knowledge and deep immersion in the fundamental foundations for understanding the processes and properties of rocks, the manifestations of which we use in our activities as search signs of ore, are required. In other words, it’s like evidence for an investigation. To decipher them, you need deep scientific knowledge and experience. It is important to understand what geological processes took place, under what conditions, whether they led to the formation of ore formations or not. This allows us to sort out territories into promising and unpromising ones. Here, such a scientific approach is indispensable.

— This is one of the oldest scientific societies in Russia and even in the world. Historically, we, as students of the Department of Mineralogy of the Mining Institute, in one way or another participated in the life of society, helped in its work, were involved in the organization of various events, publication of collections, etc.

Therefore, we had the opportunity to become members of the Russian Mineralogical Society without any special selection. This does not impose any responsibilities, but it gives a wonderful opportunity to communicate with colleagues, exchange experience.

— At Polymetal, you head the Technology and Joint Projects Directorate. In your opinion, what advanced developments can change the face of geological exploration in the near future?

— If we are talking about the next 3-5 years, then most of the changes are related to portable devices and express analytics. Traditionally, we collected material, gave it to different studies, and then got the result after 3-4 months. Now we have more and more tools that allow us to perform express analysis directly in the field. Hence many changes in the organization of these works and decision-making. As a result, we can often save the season. This is a fairly significant indicator of efficiency.

If we talk about longer-term prospects, then in 10-15 years remote methods of cosmodance, deep geophysics, highly sensitive geochemistry will certainly be significantly more developed, geological exploration will increasingly go to depth.

— What do you think, due to what you managed to achieve success in the profession and career growth?

— It seems to me that an important role was played by the systematic approach and my ability to structure processes. Well, the main thing is a caring attitude to the common cause, the desire to constantly improve the results, not to stand still.

And it is also important to be able to work in the mode of multitasking, a large number of projects, without losing the general logic and focus on the main goal, key priorities.

– There is a popular belief that in the extractive industry it is easier for men to make a career than for women. Have you personally encountered gender stereotypes?

– Obviously, men and women are inherently different. However, modern working conditions allow both men and women to have equal opportunities to realize their abilities and ambitions.

Of course, the mining industry is still predominantly male. This is due to the specifics of labor, and to historically established traditions. Now, due to the qualitative improvement of working conditions, the emergence of new technologies, and the increase in safety requirements, women really have employment opportunities for a wider range of positions, including dump truck drivers. That is, there are fewer and fewer places where the severity of the conditions and the risks are such that it is impossible for a woman to be there. But, in my opinion, this is a general trend associated with the vector to ensure the safety of people at work.

Girls who go to a mining and geological university understand that they will have the opportunity to find a job in their specialty. Ten years ago, such chances were much less.

It just has to take some time for the existing stereotypes to disappear.

— How did you decide to participate in the contest “Talented Woman in the Extractive Industry”? Did you expect to be able to win?

– I had a desire to support this competition, it was held for the first time. I knew my story could be interesting. Plus, I was very supported by current and former colleagues, as well as colleagues in scientific and educational activities, it was unexpected and very valuable for me.

And I was also interested to see the other contenders, they are very worthy opponents. It’s been great to see how many successful women we have in the industry. Of course, I was worried and wasn’t sure of winning.

– Your nomination sounds like “Inspiring Leader”. What should it be, in your opinion, what qualities are needed to inspire subordinates to labor feats?

– First of all, he should be not indifferent, he should inspire with his interest, some spark, energy, his knowledge and his perseverance, and also courage.