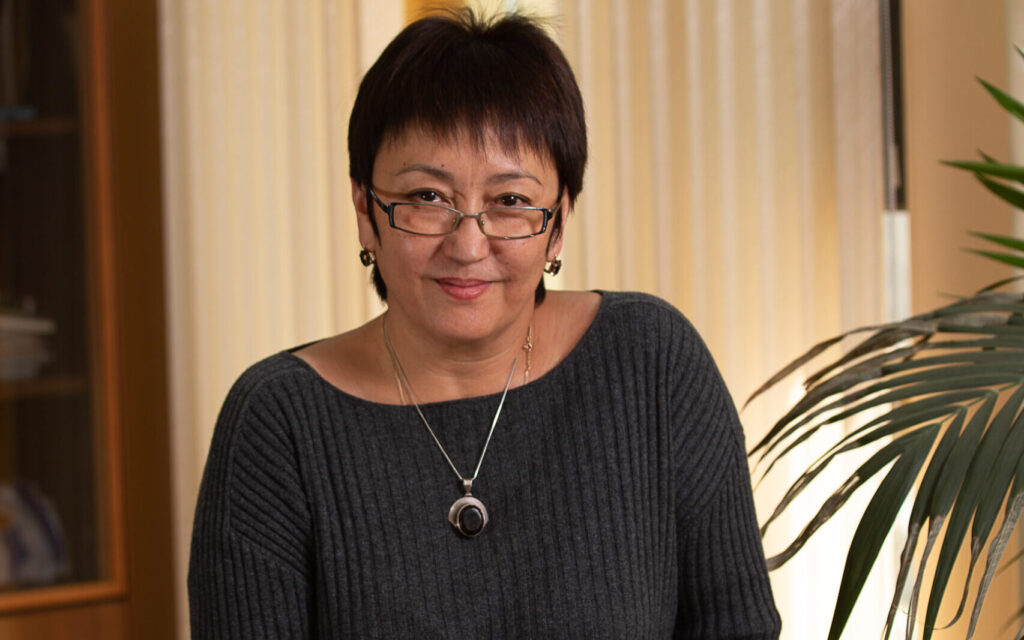 Natalya Barambaevna Kaibalina has gone from an ordinary mine surveyor to the head of a mining asset. Now, as Managing Director of Taseevskoye LLC, she is responsible for Highland Gold’s Baleisky cluster in Transbaikalia. In the interview, she talks about what she considers to be her main professional achievements and the challenges she still has to overcome.

– Natalya Barambaevna, tell us how did you get into the mining industry?

– By profession, I am an engineer-mine surveyor, but not immediately after the institute I came to mining, but only in 2000, at a rather young age, I got a job in the Kazzinc holding. She started as a surveyor of a capital mining group, then became the chief surveyor of the underground Ridder-Sokolny gold mine, one of the largest in Kazakhstan, and then headed this mine for about three years.

At some point I left for HR, worked as the head of the audit department of the human resources department of Kazzinc. It must be understood that Kazzinc is a large holding company with several production complexes, the staff is 22 thousand people.

– Under what circumstances did you move to Russia?

– At the end of 2006, Highland Gold and Kazzinc agreed on the joint development of the Novo-Shirokinsky mine in Transbaikalia. The construction of the factory and restoration work at the mine lasted two years. I first came to Transbaikalia in March 2008 as part of the Kazzinc delegation, and a year later I moved to Russia. My transition to Highland Gold was smooth: I started doing Novo-Shirokinsky remotely, and then I moved.

As part of Highland Gold, I changed several positions and regions. First, she led the personnel service at Novo-Shirokinsky in Transbaikalia, in 2012 she went to Moscow to a management company for the position of deputy director of personnel, about three years later she went to the Khabarovsk Territory, to the Mnogovershinnoye enterprise. And then finally she returned to Transbaikalia and headed the Baleisky cluster.

– What is currently in your area of responsibility?

– I am the managing director of Taseevskoye. Now the Baleisky cluster is in my area of responsibility – these are three assets: the Taseevskoye, Sredny Golgotai and man-made ZIF-1 deposits.

– Opportunity to launch an industrial enterprise from scratch. I participated in the launch of Novo-Shirokinsky, but not as the first person, but otherwise I worked at existing enterprises. Now, as part of the Baleisky cluster, we are preparing to launch heap leaching at the tailings of Mill-1, and for me personally, this is an interesting challenge.

What professional accomplishments are you proud of?

– As I said, I was the head of the underground Ridder-Falcon mine. And this, excuse me, is to extract 2 million tons of ore from underground, almost 5 tons of gold! I had one and a half thousand people under my command, practically only men. I was the first woman – the head of the mine in Kazakhstan, and almost the only one so far.

What about personal achievements?

– I have three children. Not a lot.

How do you manage to combine work and family?

– The children are all adults, the youngest son is 26 years old. That’s why I’m at work now. And I take care of the children when I go to visit them.

– What should be done to achieve success in the profession, especially in the male team? What do you think helped you?

– As one of my old acquaintances said: “No one promised to feed on the way.” So do what you can, with what you have, where you are.

Did you have any special, memorable days at work?

– Over the years of work, I had both professional breakthroughs and unpleasant situations, I remember both good days and bad ones. There were those who do not want to remember, the worst were associated with violations of safety regulations. The fact that our company is now focusing on industrial safety, labor protection, I personally think is the most correct. No commercial achievement is worth the loss of human life.

– If you had the opportunity, from the position of your current experience, to turn to your 20-year-old self and give advice, what would you say?

– At the age of 20, I was not very inclined to listen to advice, to my deepest regret.

What would I say? Probably, I would advise you to take up work by profession earlier, and not think for a long time whether it is worth going into mining. I think it was one of the most correct decisions in my life – to go to work in my profession.

What do you value most in people?

– You can name a lot of things, but I would probably single out efficiency (precisely as the ability to solve problems, and not just sit out working hours), honesty (if a person deceived me once, I will never be able to trust him again – unfortunately , I have such maximalism in character, I know it). Well, humor, I have to endure with humor!

– Is there a person in your life who somehow influenced your professional choice?

– Yes, of course, there is such a person who had a very big influence on my whole life – this is Yuliya Popovich, the former first vice-president of Kazzinc. We still keep in touch with her. This is a man, I think, of the highest professionalism, logic, and at the same time high spiritual qualities. I truly admire this woman.

The interview was prepared for publication by Interfax correspondent Olesya Elkova