“For a woman, the concept of “unteachable” is inapplicable” 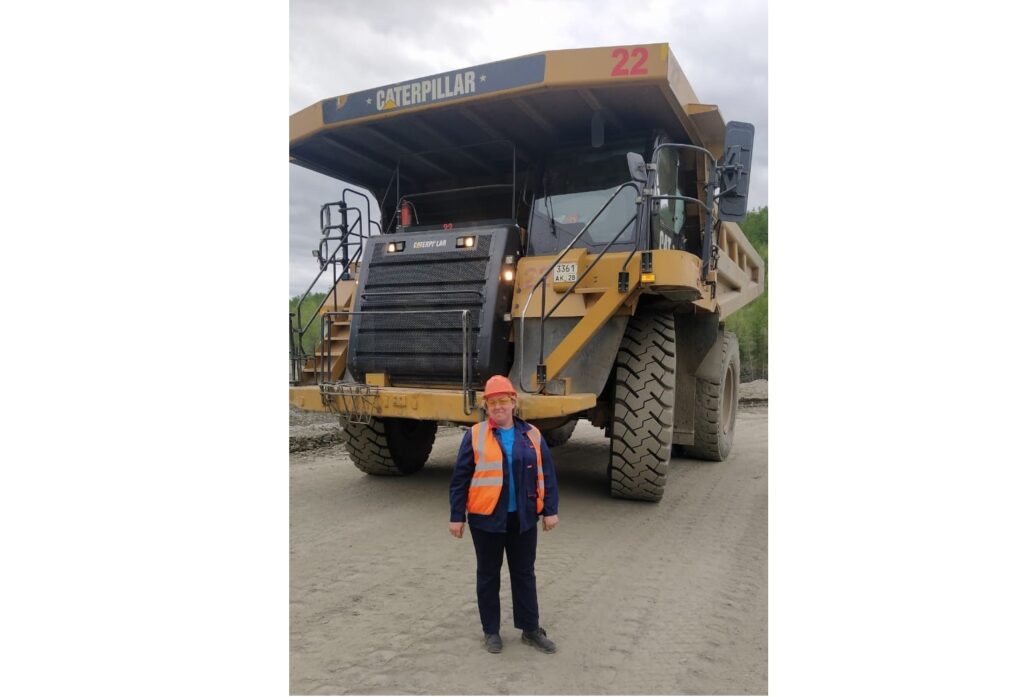 Tatyana Oleinik has been working at the Albynsky mine of the Petropavlovsk company since 2012, and she has one of the most unfeminine professions in the industry – a dump truck driver. In an interview with WIM Russia, she talks about her fighting friend Katyukha and the challenges faced by mothers who work on a rotational basis.

– Tell us about your “iron horse”, how long have you been working on this particular machine?

– I drive a Cat 777 F. It so happened that during the distribution of machines, I got the same one on which I had an internship when we had just studied at the Pokrovsky Mining College of Petropavlovsk and came here for practice in August 2012. So I have been working on this machine for the ninth year, I call it “Katya”. The men call their cars “kittens”, and I have “Katka”, “Katyukha”. Capricious girl. But there are situations when you rely only on her strength. This is a quarry, there are different situations: mud, snow. It has a carrying capacity of 90 tons. But the Cat is all hydraulic, so even compared to a passenger car, the steering is lighter.

– Unmanned dump trucks are gaining popularity now. Aren’t you worried that in 5-10 years the profession may become obsolete?

– I think about it sometimes. Everything is possible, science does not stand still. If in the 1980s we were told that we would soon be talking in small boxes, no one would have believed it, but now everyone has such phones. On the roads of Russia, it is unlikely that they will soon come to unmanned vehicles (you know, there are two troubles in Russia), but in a quarry, at an enterprise where technological transport is involved, this is quite possible. Of course, if the monitoring in the quarry is properly organized, if the roads are normal, smart people are behind the monitors.

And I could try to be trained as an operator of unmanned vehicles, why not. Of course, the dispatcher is constantly in suspense, you need to keep the whole picture in your head, monitor several pieces of equipment. It is necessary to take into account the soil, the height of the dump, and so on.

– Not afraid to unload? Drive close to the dump, also backwards.

Yes, it’s scary, especially the first time. But, when we first arrived, in general, everything was scary, that’s right, everything is really scary! Just imagine: you are sitting on the second floor of the house, on the balcony and looking around. You turn back, it seems that everything has already arrived, and there are still five meters of movement. To understand this, you need to work for some time, realize the dimensions of the car – and everything falls into place. Or, for example, you load or unload with a slight slope – you sit and grab everything. It is clear that this is not a concrete platform, as at the cosmodrome, there can be no ideal conditions with all the desire. But over time, everyone got used to it, we work.

Some of my classmates were ready to run away after the first acquaintance with the car. Most of us had no idea what kind of car it was. But everyone had the idea that you could earn money at the mine that you would never earn at home.

– How many women are drivers of dump trucks in Albyna now?

– There are seven people in our watch, seven or eight more people in another watch. Guys, of course, much more. They work for both Cat and BelAZ trucks. BelAZ is a completely different car, electric, where the engine is like a mini-power plant, a small village can be lit.

Previously, there were more female drivers at the mine – about 35 people on both shifts. But someone moves to other companies, someone leaves the profession due to age (they recruited girls from 20 to 35 years old, but few young girls came, and they worked and got married, and we, who are older, stayed). And in general, the profession is unfeminine. And many men are home builders: they look, smile, but still do not accept. There is such an attitude: “a woman should stay at home, cook borscht.” So it’s hard mentally, and physically difficult. Again, shift work is not for everyone. With quarantine now you generally go and you don’t know how long – for two months or more. All families, all children.

– I know that you are a mother of many children. Who looks after the children while you are on duty, mostly the husband?

– The main burden on the husband. And on my phone. Children study at school, sometimes it is necessary, for example, to contact the teacher via video link, but the Internet is lame. This year, my departure for the shift coincided with the birthday of my daughter, she turned 13 years old. I was offended that my mother was leaving again. And for the birthday of the boys, I have twins, I hope to return, they are waiting for me. Now it’s generally easier, they have become older, they help each other, they are independent. If you don’t know something, the Internet will help you.

– Maybe it’s not bad that children are taught to be independent?

“That’s what I say to my conscience every time I feel ashamed in front of it. But, you know, all of our girls have children, some are already adults, some are not very good. We come from completely different professions, and to a large extent precisely to solve our problems and help our children. Girls, for example, worked as nurses, the salary is small – how will you help the child?

– And what did you work with before Petropavlovsk?

– I was on maternity leave, I worked as a mother. I am a teacher of history and law by education, but I left school a long time ago, changed several professions: I worked in a cafe (first as an ordinary waiter, then as a bartender, administrator), and in an advertising agency (client manager). Whatever happened, you had to earn money.

– There are all sorts of stereotypes about women driving, but it seems to me that women are more attentive.

– This is because you are a woman, and from the point of view of psychology, you will defend the position of women. But maybe you are right. Although men are more resilient.

When my husband and I go somewhere, he constantly worries about me: “Aren’t you tired? Maybe let’s change? Why don’t you go at night.” And I think to myself: “Lord, have you forgotten where I have been working for so many years? And how I work there: at night, and during the day, and in the rain, and in the snow.

The idea of hiring girls as dump truck drivers was spied on in Canada. At first, everyone laughed, and the leadership of Petropavlovsk really began to recruit women. Of course, the profession is not for women and there may be difficulties, but we had support. And little by little we learned everything. You know, the concept of “unteachable” is not even applicable to a woman, well, or it is difficult to apply. Even remember how girls and boys study at school. When I was studying to get a license, the owner of the driving school said: “If a man has not learned to drive at the age of 18, he will never learn. A woman can be taught at any age.”